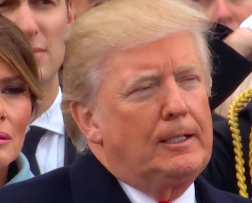 I don’t believe President Trump was disrespectful or trying to be disrespectful to the family of a soldier, LaDavid Johnson who was killed in Niger. This issue has been politicized, first by the President by trying to imply that previous Presidents never called families of fallen soldiers. Then by Congresswoman Wilson who was listening in on the Johnson call with the family. And then finally by the media, who wastes no opportunity when it comes to reporting negatively about the President.

On another call to the widow of another soldier the call was appreciated and very warm and supportive of the family. I haven’t heard much reporting on that one. Imagine that.

I don’t think the Johnson family would have ever thought the President was being disrespectful had not the congresswoman been in the car at the time of the call. I personally believe she pushed them that way. Many in the Congress don’t like the President. I think she took the opportunity to try to make the President look bad in this instance. All she had to do was wait. The President had already set himself up for failure by mouthing off about previous Presidents not making the call.

President Trump has a big mouth, especially when it comes to bragging about himself. That’s what he was trying to do when he said that other Presidents did not make these calls. He would not have half the media attacks if he was a better person at his core, or at least knew when to keep his mouth shut.

He is self-centered, arrogant, and sometimes not very smart. He doesn’t listen to his advisors, who I am sure are trying to help him be more effective.

This post is not to bash the President, well not just the President. It is just an observation. I really do wish he could be more effective. I still think he has the potential to be a good President, but the way things are going right now, he will either go down as the worst president ever or the one who divided and then conquered (destroyed) the great United States of America.

The insults and the finger pointing and accusations and hatefulness, it all needs to stop! But I know it won’t.  It seems to be human nature to learn the hard way.

If you, we, want our country to continue to implode all we a have to do is keep bickering and insulting one another. Never have I seen such a mess extending from the Whitehouse to our government, and to the people of the nation. We are in trouble. The United States is in danger of collapse. Next year it won’t be recognizable if we keep going the way we are going.

Those of us who pray, we need to do just that. Don’t get sucked into what is happening in the media. Keep an open heart to the Spirit of God and pray. If we do not this country is doomed.