I was just watching a piece aired on May 8, 2017, on NBCBLK called, In the Age of Trump, Black Church Preaches Gospel of God and Guns, which talked about the increase in gun sales, especially among African-Americans. The increase has been significant since the election of Donald Trump. What is most disturbing about this increase in gun sales is not that black people are buying guns, but that more and more “Christians” are packing heat. Their justification? “Oh, God was a God of wrath and vengeance.” I’m sorry, but I don’t believe the Lord wants to arm the church. 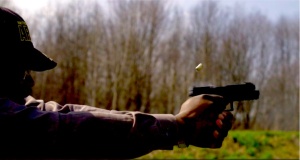 Yes, there are many accounts in the scriptures that report violence in the name of God, and by God. However, I still have a problem believing God is the opposite of what he wants us to be. One of the ten commandment says,“Thou shalt not kill” (Exodus 20:13). Jesus said in the Garden of Gethsemane when one of his disciples pulled out a sword, presumably to defend the Lord, “Put your sword in its place, for all who take the sword will perish by the sword”(Matt 26:52). And this same God allowed himself to be captured, falsely convicted of crimes he didn’t commit and then to be beaten beyond recognition, crucified and died a horribly painful and cruel death.

These are just some of the reasons I find it hard to believe that we should arm ourselves with the intention of harming or killing one another in the name of Jesus. One of the reasons Jesus SUBMITTED to this cruelty was to show the people of this world the true nature of God.

The writer of Hebrews says,

“Long ago God spoke many times and in many ways to our ancestors through the prophets. And now in these final days, he has spoken to us through his Son. God promised everything to the Son as an inheritance, and through the Son he created the universe. The Son radiates God’s own glory and expresses the very character of God, and he sustains everything by the mighty power of his command. When he had cleansed us from our sins, he sat down in the place of honor at the right hand of the majestic God in heaven”(Hebrews 1:1-3).

Before Jesus was born God spoke to the Israelites through prophets. However, when Jesus did come there was no need for a prophet. Jesus was the Son of God in the flesh. He was God incarnate. As such Jesus was God’s greatest revelation of Himself. If you want to know what God is really like you must look to Jesus.

Now I don’t pretend to have all knowledge about who God is. However, what I know about the Lord Jesus is that He was non-violent, forgiving, kind, and full of love and grace. He said he was here for the deliverance of all people. And those people include all the ones you may hate for whatever reason you have used to justify why you need a gun, or why your enemies need to be eliminated. All lives matter to the Lord, Jesus.

I’m afraid Jesus doesn’t condone or bless our “right to bear arms.” When the Lord finally does return I hope you’re not thinking that you will have any rights to any weapons or anything else designed or meant to cause harm to another. I don’t believe a willingness to kill another is an indication of righteousness. I certainly don’t believe the church should be arming itself for physical confrontations.

I am not saying that we shouldn’t have authorities armed to protect the citizens of this current society, or, a military to protect the country. I just don’t think everybody on the planet should be armed and taking matters into their own hands. You’re just gonna end up dead or in prison for killing someone.

I believe God is a peaceful being and he wants us to be peaceful as well. What we really need is for Christians to begin to pray; first for yourselves, for a revelation of who God really is. I can tell you all day that the Bible says that God is love, but, until you have had this revelation for yourself, you don’t really know, nor will such information affect you. It’s part of why you want to buy a gun (take up the sword), or feel justified in taking someone’s life for whatever reason.

I admit there are times that I get very frustrated, maybe even angry, and I want to lash out. I may even have the thought of actually killing someone. But deep down I don’t believe in violence. And I don’t believe God does either. I don’t care what scriptures you throw at me in an effort to prove otherwise. I believe God was misunderstood. Before Jesus came man simply didn’t have a clear understanding of who God is. And even after, we didn’t get it. Example: Emperor Constantine and his conquest in the name of Jesus.

I’ve changed. I really have. When I do have violent thoughts (rare), and actually think it through all the way to the end I am horrified by it. I don’t want to be hurt nor can I stand the thought of hurting someone else. If you are capable and willing to take a life I think that’s a problem, especially if you call yourself a follower of Christ.